Pep Guardiola’s free-flowing Manchester City are rightly the talk of English football having taken the Premier League by storm in this campaign.

However, three divisions below the top-tier, Luton Town boss and Skillequal’s Nathan Jones, who picked up the League Two Manager of the Month Award for both October and November, is also winning a lot of admirers for his side’s goalscoring exploits.

The Welshman’s table-topping outfit have netted more times than any club in the top four divisions with 51 goals from their opening 22 matches, as the the Hatters aim for promotion after falling shy in the play-offs last term.

Town showed their intent from the off when they thumped Yeovil Town 8-2 on the opening day of the season at Kenilworth Road – a place they have since hit both Stevenage and Cambridge United for seven.

The 44-year-old’s attractive style of football, combined with a solid foundation (Luton have the second best defence in League Two), means he is viewed as one of the most exciting British managers in the game.

Now with January 2018 marking just two years since he kicked off his managerial journey in the Football League, Nathan, who has held the positions of player, scout, assistant, dietician and fitness coach in his career, spoke to us about how he arrived at the position he is in today.

Nathan enjoyed a 21-year playing career, which included highlights such as winning promotion with Numancia in 1996, Southend United’s Player of the Year Award in 2000, three promotions in five years with Brighton & Hove Albion, and captaining Yeovil Town to the 2007 League One play-off final.

Although his interest in coaching enhanced during his time as a player, he had shown a thirst for it as a teenager by spending two summers coaching in America when he was an apprentice at Cardiff City.

“I was really interested in coaching from a young age,” said Nathan. “When I was with Cardiff I used to coach with my mates at home so when the chance arose to go to America it was a wonderful opportunity I just couldn’t turn down.”

This early appetite was whetted in Spain when he joined second division side Badajoz, exposing him to a new style of football.

“I went out there initially for my playing career but then it opened my eyes to the difference in coaching, organisation and details they go into compared to here.”

Having been raised in the “sheltered” Welsh mining village of Rhondda, Nathan said: “I wanted to – and I encourage any young professional to – try anything that broadens your horizons.”

Nathan’s first opportunity in coaching came in his time at Yeovil Town, where, despite being club captain, he took up the position of Ladies first-team coach for two years in which he helped the side progress in the South West Combination League either side of attaining his FA Level Three Coaching Badge.

His talent and methods impressed the Somerset club who provided him with the chance to develop his skills by appointing him as player-assistant in 2009 – a position he held until midway through the 2011/12 season.

When that campaign came to a close, Nathan – determined to kick-start a sole coaching career after passing his UEFA A Licence the previous year – called time on his playing days at the age of 39, having made over 560 career appearances.

Charlton Athletic came knocking and he took on the Addicks’ U-21s side. It was at The Valley where the wider football community stared to recognise his skill for coaching and where he claimed his first pieces of managerial silverware, winning the Professional Development League Two, Southern Area league and Kent Senior Cup treble.

Despite a successful year in SE7, Charlton were not able to hold on to Nathan who made the move to join Brighton & Hove Albion as Oscar Garcia’s assistant – a position he was able to fill due to his fluent Spanish.

Handed more responsibility than ever with the then Championship side, Nathan quickly earned the respect of all at the club. The fact he was kept on under the following two managers – Sami Hyypia and Chris Hughton, who said he “has all the attributes to become a very good manager” – as well as filling in for two games as caretaker boss is testament to that. 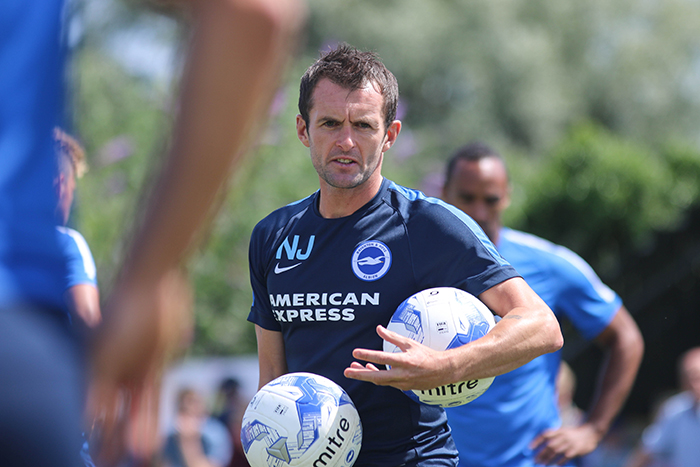 Nathan as a coach at Brighton & Hove Albion.

Like Hughton, The FA also spotted his qualities in both senior and youth development as they recruited Jones to shadow then U21s (now senior) manager Gareth Southgate and assistant Steve Holland in 2015, including at that summer’s European Championships.

With his Young Lions duties and the Seagulls in contention to be promoted to the Premier League midway through the 2015/16 campaign, it would’ve been easy to stay to try and get into the top flight. But, equipped with a UEFA Pro License, Nathan was adamant to carve out a name for himself as a number one.

“I was one of those coaches who always wanted to be manager,” he said. “I felt like I had a wonderful education – learning on the job at Yeovil, working with good people at Charlton and then assistant to three managers at Brighton. It was just about waiting for the perfect opportunity.”

In January 2016, the place that he said is “proving to be that perfect opportunity” came two steps down the Football League at then 18th placed Luton Town – the club he started his professional playing career with over 20 years ago beforehand.

GOT TO HAVE FAITH

From his time on the other side of the white line, forward-thinking Nathan took the importance of making football fun and varied into his coaching career. He is known for his innovative training sessions, which stem from hours of meticulous planning and studying managers he’s both played and worked under.

“From the managerial side I took a lot from Chris Hughton and Chris Powell who were very good man managers and human beings,” said Nathan. “I also had fun playing for the likes of Micky Adams, Steve Coppell, Russell Slade but have seen things I wouldn’t do. It’s all been part of a very good learning curve.” 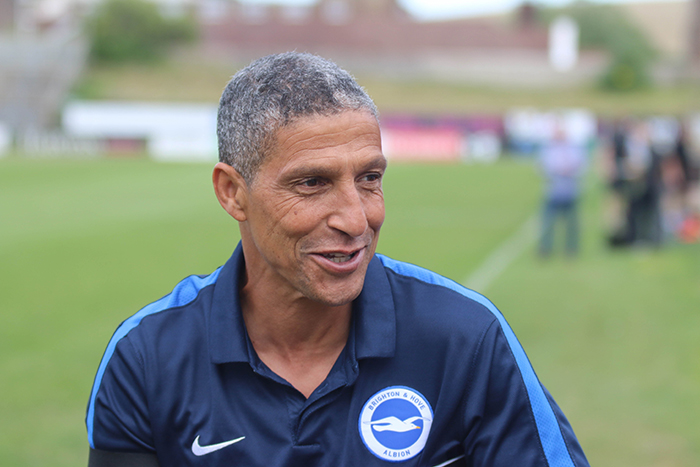 Chris Hughton had a big impact on Nathan’s managerial style.

Also knowing how vital it is to keep a calm head in the pressure cooker of the modern-day game, he understands people and, having worked a variety of roles across all many levels, has the experience of relating to the diverse needs of a playing squad.

Unbeknown to some, the Rhondda-born coach is a devout Christian (armed with tattoos of praying hands, the crucifixion, Jesus Christ and Michelangelo’s The Creation of Adam) and, in an age where temptations are rife, he accredits his persona to his faith.

“It has given me a measured approach not just in my job but life in general,” he said. “It allows me to stay grounded; not get too high or too low. I believe everything is God’s will and God has given me strength to believe in the work we do.”

A man who believes “if you’re good enough, you’ll get an opportunity, regardless”, the Welshman’s resilience and thirst to succeed has seen him bounce back from setbacks throughout his career, whether being rejected as a player at Cardiff or leading Luton’s current promotion charge after play-off heartbreak.

As well as chasing league success, Nathan celebrates two years in charge with a trip to Premier League side Newcastle United in the FA Cup Third Round on January 6.

“We’re really looking forward to it but we’re not naïve enough to think we’re definitely causing an upset,” he said. “Newcastle are an excellent side and they have a fantastic manager in Rafa Benitez, but it will be good to test ourselves against higher league opposition.”

But for the man whose publicly stated he wants to “reach the top of the game”, Nathan will be plotting on masterminding an upset which would attract the national spotlight on his undoubted abilities.